Sport has no racial, social or political barriers, which means that it is the perfect way for all men and women, boys and girls to achieve amazing results, regardless of race, creed or colour. The opportunity to represent one’s country in the name of sport at an international level is probably one of the greatest achievements an individual can make. The pressure that the competitors have at this level is enormous, and goes far beyond normal physical endurance. To win, especially at such a high level, competitors will have to tap into inner resources that their years of training will have prepared them for.

Member service is our first aim, we care for you because – we are the Real Global Player!

We would like to extend a huge CONGRATULATIONS to our new INTERNATIONAL OFFICIALS who traveled to Andria, IT to get their certification:

From Right to Left:

Please help to congratulate them on their deserved recognition though hard work and dedication to WKF!

World Kickboxing Federation was founded 1964 in the United States of America and since is doubtless the fastest growing World sanctioning body, with events everywhere in the World.

The first WKF was originally formed in 1964 in Chicago, by USKA (United States Karate Association, working 1948 – 1999).  In those days WKF meant World Karate Federation, but has nothing to do with World Karate Federation as we know it today (founded 1990 and formerly known as WUKO).  Soon it was outlawed because it was full contact bare fist/bare foot.  In the early seventies the name was changed to World Kickboxing Federation,  long before anybody else came to be.

In 2008 the WKF head office was established in Europe under new leadership.  For the first time in the WKF history, the structure of WKF had changed.  New modern ideas, internet presence and weekly updated World rankings and World wide event schedule was essential for the new WKF.  Contracts with new promoters World wide was the first successfully step.

His aim for the first year of 2011 was to sanction 30 major title fights, but by December 2011, WKF head office had already sanctioned 72 (!) title fights on six continents. More than 150 events Worldwide were sanctioned by WKF during his first year as CEO.

Today WKF has six continental office and directors, responsible for administration in their area.

WKF is present all over the world, in pro ring sport, MMA and amateur events, stronger and more powerful than ever.  We have really busy and successful continental directors, promoters, champions, officials, referees!  Without their co-operation, effort and work we would not have established worldwide success. 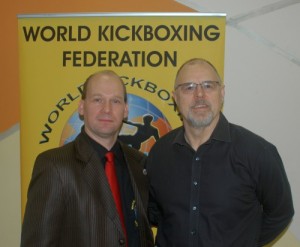 We would like to extend a huge CONGRATULATIONS to our Head Official Fred Isajenko who is now officially an A Class Referee and also the newest WKF IRC Member! Please extend your congratulations directly to Fred.

The WKF IRC is responsible for the rules and referee training world wide. Since Budapest we have a new member in the team of the 7th “wise man” . In unanimous decision the attended IRC members appointed A class referee Mr. Fred ISAJENKO from WKF CANADA as new IRC member.